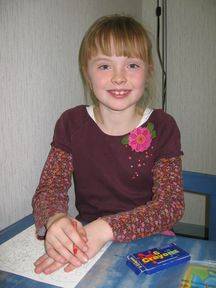 During the fall of first grade, our daughter's teacher told us that she suspected Sydney suffered from ADHD.  A consultaton with a local psychologist seemed to confirm the teacher's suspicions.  But we weren't convinced, and neither were her kindergarten or pre-school teachers. . . The same week, we got the "final diagnosis," a friend told me about vision therapy and how it was working for her son.  We were open to anything that might save Sydney from a lifetime of medication, so we came to Dowis and discovered she had pretty severe convergence insufficiency.  We began vision therapy and noticed a change in her outlook and personality within a couple of months.  By the time she started second grade, she was back to the happy, enthusiastic learner we'd known in kindergarten.  And, a year after we'd been told that she'd need special education for ADHD, we were informed by her school that she'd been placed in the Talented and Gifted Program (TAG)!  We couldn't believe it!  Vision Therapy has had a dramatic - and obvious - effect on Sydney's life and we're SO grateful!!!!